The possibility of a better and more humane world, especially for children with special needs, derives from the science of Behavior Analysis, founded by B.F. Skinner.

This led us to the position that the effective technology of Applied Behavior Analysis (ABA) would directly and meaningfully impact the lives of children and their families. With this vision in mind, we founded Applied Behavior Consultants, Inc. (ABC) in 1987.

For over 21 years ABC has provided ABA services to the community serving individuals with Autism/Autism Spectrum Disorder (ASD), and other developmental disabilities.

Coming from this perspective of empowering parents, ABC’s roots lie in a “trainer to trainer” model where training others would result in effective ABA programming for individuals with special needs. From this precept, ABC has developed an extensive number of programs to meet the growing needs of all individuals with disabilities and Autsim/ASD. With the diagnosis of Autism/ASD rising, ABC has developed services to meet that challenge in several locations throughout California (Sacramento, Central Valley, Bay Area; North and South East Los Angeles).

ABC developed consultation for individuals with Prader- Willie Syndrome in 1987 and a Care Provider Training Series (CPTS) for Care Homes a year later. In 1990, ABC started its first in-home Autism programs in the Sacramento region. In 1994, we began our first Non-Public School (NPS) for children with Autism/ASD in Sacramento and eventually in Durate and Ontario; and in 2006-2007, ABC started its Infant-Toddler programs in Duarte, Central Valley, and Sacramento. We now have opened site based Early Intensive Behavior Treatment Programs in Stockton and Sacramento.

Internationally, ABC has been successful in disseminating ABA in Europe, Asia and Africa. We continue with our effort in spreading ABA to all who need the technology worldwide. 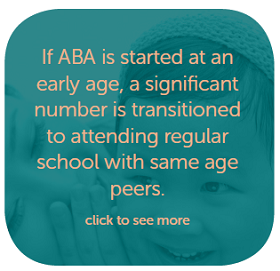