Dr. Joseph Morrow is President and co-founder of Applied Behavior Consultants Inc. ® ( ABC, Inc).   He was a pioneer in the academic development of Behavior Analysis in California , creating one the first courses in 1966 and has published numerous papers on behavioral psychology and his first publication on the behavioral treatment autism was in 1966.  He received his Doctorate in experimental Psychology in 1965 from Washington State University and has been a Board Certified Behavior Analyst since 1999.  He has taught at the California State University, Fullerton; Indiana University, South Bend; (where he was department chair) and California State University , Sacramento where he is a Professor of Psychology and Behavior Analysis (Emeritus).   His academic career received many awards culminating in the Livingston Lecture Award at Cal-State Sacramento in 2002.  “This award recognizes a sustained and unique contribution to the campus community in providing intellectual leadership and has important significance to the life of this university.”  Dr. Morrow has also been an active member of the behavioral community and a member of The Association for Behavior Analysis, International (ABAI) since 1974.  In 2006, he was given an award from that organization for “Outstanding Contributions to the International Dissemination of Behavior Analysis”  He is a former president of the Northern California Association for Behavior Analysis, was active in its merger with the southern California sister organization into the California Association for Behavior Analysis, where he served as Board Member and Conference Chair.  Additionally, he is a member of the International Society for Behaviorology for which he served as Conference Chair.

Ms. Terzich-Garland is Co-founder/Vice President and Chief Clinical Officer of Applied Behavior Consultants, Inc .® (ABC, Inc).  She received her Masters of Arts Degree in Psychology with a concentration in Behavior Analysis from California State University, Sacramento and is a Board Certified Behavior Analyst as well as a Certified PECS TM Implementer/Supervisor. She is a member of the national and state-levels of the Association for Behavior Analysis, and has been an officer of the California Association for Behavior Analysis and Easter Seals. She has over 25 years of extensive clinical experience in the behavioral treatment of Autism/Autistic Spectrum Disorder ( ASD) and is the developer of ABC’s generalization program R.E.A.L. (Recreating Environments to Accelerate Learning, 1996) by which all ABA programs are built on for home, school and infant-toddler centers. Ms. Terzich-Garland is also the developer of ABC’s clinical staff training programs (Caring and Effective Education, 1993). This publication is the basis for ABC’s staff training nationally and internationally. She has conducted numerous workshops and in-services on ABA including discrete trials; verbal behavior; PECS; social behavior, play assessment analysis and generalization. She has also presented nationally and internationally on a wide range of topics concerning the treatment and education of children with Autism, ADHD and other developmental disabilities. Ms. Terzich-Garland has co-authored and presented several research papers on the behavioral treatment of autism. She and Joseph E. Morrow’s work are described in the textbook, “Behavior Analysis and Learning (Epling and Pierce, 1995).” 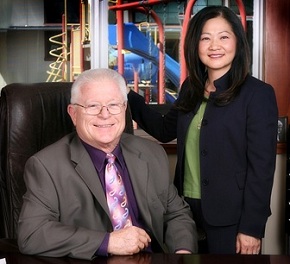 “We would like to express our gratitude to the families and their children whom ABC has had the privilege to serve.”